Traveling throughout the South during the 1950s was hazardous for African Americans. There were precious few hotels and restaurants that opened their doors to minorities, and fewer still had accommodations above the bare minimum, to say nothing of the racism and violence that followed. But in Birmingham, black entrepreneur and eventual millionaire A.G. Gaston created a first-class motel and lounge for African Americans that became a symbol of pride of his community. It served as the headquarters for Birmingham’s civil rights movement and became a revolving door for famous entertainers, activists, politicians and other pillars of the national black community. Author Marie Sutton chronicles the fascinating story of the motel and how it became a refuge during a time when African Americans could find none. 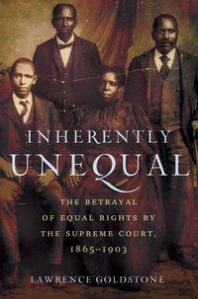 A potent and original examination of how the Supreme Court subverted justice and empowered the Jim Crow era.

In the years following the Civil War, the 13th Amendment abolished slavery; the 14th conferred citizenship and equal protection under the law to white and black; and the 15th gave black American males the right to vote. In 1875, the most comprehensive civil rights legislation in the nation’s history granted all Americans “the full and equal enjoyment” of public accommodations. Just eight years later, the Supreme Court, by an 8-1 vote, overturned the Civil Rights Act as unconstitutional and, in the process, disemboweled the equal protection provisions of the 14th Amendment. Using court records and accounts of the period, Lawrence Goldstone chronicles how “by the dawn of the 20th century the U.S. had become the nation of Jim Crow laws, quasi-slavery, and precisely the same two-tiered system of justice that had existed in the slave era.”

The very human story of how and why this happened make Inherently Unequal as important as it is provocative. Examining both celebrated decisions like Plessy v. Ferguson and those often overlooked, Goldstone demonstrates how the Supreme Court turned a blind eye to the obvious reality of racism, defending instead the business establishment and status quo–thereby legalizing the brutal prejudice that came to define the Jim Crow era.