Five Questions to Ask Before You Invest

Whether you’re a first-time investor or have been investing for many years, there are some basic questions you should always ask before you commit your hard-earned money to an investment.

Research shows that con-artists are experts at the art of persuasion, often using a variety of influence tactics tailored to the vulnerabilities of their victims. Smart investors check the background of anyone promoting an investment opportunity, even before learning about opportunity itself.

If you are not sure who to contact or have any questions regarding checking the background of an investment professional, call the SEC’s toll-free investor assistance line at (800) 732-0330.

Question 2: Is the investment registered?

Any offer or sale of securities must be registered with the SEC or exempt from registration. Registration is important because it provides investors with access to key information about the company’s management, products, services, and finances.

Smart investors always check whether an investment is registered with the SEC by using the SEC’s EDGAR database or contacting the SEC’s toll-free investor assistance line at (800) 732-0330.

Question 3: How do the risks compare with the potential rewards?

The potential for greater returns comes with greater risk. Understanding this crucial trade-off between risk and reward can help you separate legitimate opportunities from unlawful schemes.

Investments with greater risk may offer higher potential returns, but they may expose you to greater investment losses. Keep in mind every investment carries some degree of risk and no legitimate investment offers the best of both worlds.

Many investment frauds are pitched as high return opportunities with little or no risk. Ignore these so-called opportunities or, better yet, report them to the SEC.

Question 4: Do you understand the investment?

Many successful investors follow this rule of thumb: Never invest in something you don’t understand. Be sure to always read an investment’s prospectus or disclosure statement carefully. If you can’t understand the investment and how it will help you make money, ask a trusted financial professional for help. If you are still confused, you should think twice about investing.

Question 5: Where can you turn for help?

Analysis: Morgan State University needs approximately a $2 billion endowment to allow all of its students to attend school debt free annually. Located in Baltimore it shares the city with one other state HBCU. Immense opportunity and challenges exist for Morgan State University. In a city with the seventh largest African American population by numbers the opportunity to grow its population with homegrown talent is immense. High school graduation rates for African Americans have improved dramatically in the city the past year but with fiscal cuts coming from the federal and state governments it remains to be seen if the improvement can be sustainable without strong commitment from the private sector. Home to multiple African American owned banks there is opportunity to secure real sponsorships and circulation between the African American private sector and the university. Prior to the great recession Maryland also boasted the highest median income for African Americans in the nation for states with sizable African American populations. This leaves a bit of head scratching then for a school with its size and income around it to only have a $2 million endowment which is a mere 0.1 percent of the amount needed. While the opportunity is there for Morgan State University to easily become a top five endowment there is obviously a disconnect somewhere. If the riddle can be solved watch for Morgan State to become one of the darlings of HBCU endowments.

It is natural to man to indulge in the illusion of hope. We are apt to shut our eyes against a painful truth, till she transforms us into beasts. – Patrick Henry

There is a reality that European Americans seem to be aware of and African Americans seems virtually clueless to. America is fast shifting from an European Diaspora controlled country to an Asian Diaspora controlled country. The social and economic crisis in Europe has lowered European immigration and economic resources flowing to the US. This reality coupled with a rapidly declining birthrate of those of European descent in the US has left an opening for a new power to arise. Asia has seen the opening led by China and seems intent on completing a mission Japan attempted with Pearl Harbor. To not only retrench European aggression toward Asia but to have it aborted all together by creating a cold war fought primarily on US soil and limit another resource invasion of the Asian continent.  The term “minority”, an European American construct, which lumps all people who are of non-European descent into the same boat as if their social, economic, and political capital are the same is both dangerous and naive for African American strategy. Somehow it appears we have become so fixated on European Americans that we are completely missing the rise of Asian America. Let us examine a few of the statistics.

*Leads all ancestral groups in U.S.

** Asian America’s median net worth was actually higher than European America’s prior to the 2008 recession.

The graph below, showing Asians as the fastest growing demographic in America not Latinos, coupled with the aforementioned social and economic numbers will have vital future political implications. It is no secret that the more educated and affluent a population is the more civic and politically engaged they are. The chart is showing that not only will they have the education and money but they will have the raw votes in the coming decades to become the new majority with unbridled power and reduce European Americans to the largest minority group in America. One has to assume while some European Americans feels some level of responsibility to African Americans historically speaking – Asians Americans have no such baggage. This leaves one to wonder as Asian Americans assume power where that will leave African America in the power vacuum.

Asian Nation, a journalism site that focuses on Asian America reviewed the top colleges and universities for Asian Americans also took some student interviews. One very interesting quote from an Asian student attending Pomona College in Claremont, CA was “The issue of ‘integration’ is a loaded one in that many white students and staff often accuse students of color, specifically Asian American students, of being anti-integrationist because we feel the need to be politicized and develop leadership within our own community.” Whereas African Americans are obsessed with integration and diversity this suggest Asians plan to secure their strength from inward first and foremost. Ironically, this was the strategy originally of African America coming out of slavery but would fall by the wayside as the civil rights generation would pursue a fruitless strategy of desegregation virtually wiping out all of African America’s institutional strength.

From a geostrategic point of view between the Asian and African Diasporas influence in America one only need to look at the ownership of U.S. debt held by foreign countries. The two largest holders are China and Japan while ten of the top thirty-seven largest foreign holders are Asian countries in the latest Treasury report. There is $5.430 trillion of U.S. debt held by foreign countries and of that 53.7 percent is held by Asian countries while only 0.2 percent is held by South Africa, the lone African country present in the top thirty-seven holders in the report. It becomes clearer and clearer who is establishing influence and control from within and from the outside in America.

African America too often falls into the lull that all “minority” groups are in the same position as we are or want to simply settle for inclusion as we seem to want. As Chinatowns and other Asian enclaves pop up, African Americans continue to abandon our own communities in droves for “better” communities which we tend to deem any community other than our own. When we examine most African American neighborhoods and communities it is Asians and Arabs finding their economic footing by owning the majority of small businesses within our borders while Europeans still control virtually all of the financial outlets via banks or payday loan businesses. It would seem that everyone recognizes the value in our community but us. We continue to search for allies everywhere but from within and have put all of our chips on the illusion of inclusion instead of the reality of control and competition for resources. We are the group with the least but willing to share the most. In the end this lack of awareness about the rise of Asian America will leave African America with the same reality (actually worse) we faced in the early twentieth century when we contemplated putting our loyalty behind Russia  to liberate ourselves from the oppression of America. As it turned out as famously quoted by Dr. John H. Clarke, “We were not in a battle between a liberator and oppressor but between two oppressors with different methods of oppression. In the end Russia no more wanted us to be free any more than U.S. but they wanted us under their control.” The lion must awake because the fire of the dragon appears to be just warming up. 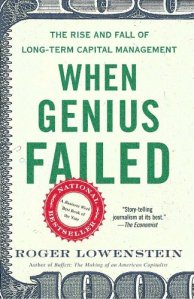 In this business classic—now with a new Afterword in which the author draws parallels to the recent financial crisis—Roger Lowenstein captures the gripping roller-coaster ride of Long-Term Capital Management. Drawing on confidential internal memos and interviews with dozens of key players, Lowenstein explains not just how the fund made and lost its money but also how the personalities of Long-Term’s partners, the arrogance of their mathematical certainties, and the culture of Wall Street itself contributed to both their rise and their fall.

When it was founded in 1993, Long-Term was hailed as the most impressive hedge fund in history. But after four years in which the firm dazzled Wall Street as a $100 billion moneymaking juggernaut, it suddenly suffered catastrophic losses that jeopardized not only the biggest banks on Wall Street but the stability of the financial system itself. The dramatic story of Long-Term’s fall is now a chilling harbinger of the crisis that would strike all of Wall Street, from Lehman Brothers to AIG, a decade later. In his new Afterword, Lowenstein shows that LTCM’s implosion should be seen not as a one-off drama but as a template for market meltdowns in an age of instability—and as a wake-up call that Wall Street and government alike tragically ignored.

All quotes reported as of 5:00 PM Eastern Time Zone