Gaines & Johnson: A Different World Of A Lesson In HBCUpreneurship & Leadership

A man must eat a peck of salt with his friend before he knows him. – Miguel de Cervantes 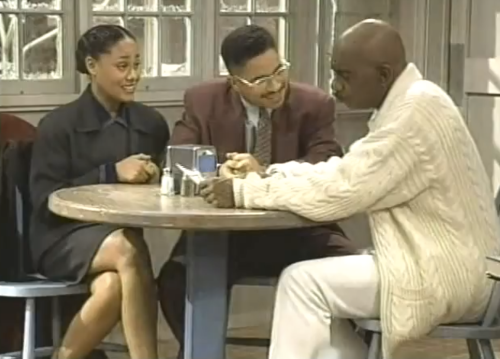 Recently Lou Meyers, the man who played Vernon Gaines on A Different World, passed away. As such it made me take some time and reflect on his character from the show. Awhile back I wrote that the characters Dwayne Wayne and Ron Johnson missed a golden opportunity to build a technology company together and instead Ron and Mr. Gaines would open what would be the “typical” show of African American ownership – a club. However, upon reflection even I must admit I missed a golden lesson about something even I experienced while I attended multiple HBCUs and something I believe to be very unique to HBCU culture.

Relationships matter. There is something amazing about the relationship at HBCUs with the students and groundskeepers, janitors, secretaries, cafeteria workers, and others who quietly make the college or university run also commonly referred to as staff. They are as integral and as invested often times in our students’ success as anyone. These unsung heroes provide the little things to HBCU students through their matriculation and was embodied by Mr. Gaines’ character on A Different World. Mr. Gaines was constantly providing words of encouragement and priceless wisdom to all that came through The Pit’s doors. He showed by example hard work and leadership to students who worked under his apprenticeship. They learned lessons from him that no classroom or schoolbook could teach. Oft times providing some of those lessons to faculty as well.

In the case of Ron and Mr. Gaines even I missed something vitally important. Mr. Gaines gave much of his life savings to obtain the club with Ron. It was a huge risk for him personally but what an amazing moment. We so often talk about how we lack access to resources especially financial ones and other expertise but it is often because we are not thinking outside of the box. Many times the resources are right under our nose. Ron and Mr. Gaines partnership was a match made in heaven. Ron was the consummate promoter, a risk taker, and full of youthful arrogance while Mr. Gaines was the steady hand of experience and wisdom along with being an operations guru making sure any ship under his care was going to be run efficiently and on time. Working at an HBCU he also could run anything on a tight budget squeezing every ounce of value out of every dollar. Ron came from a family that probably could have allowed him to bankroll it by himself but odds are he would have failed going alone. His weaknesses were Mr. Gaines strengths and vice versa. But it was years of relationship building between Mr. Gaines watching Ron mature from an immature freshman with promise to a driven young man that allowed their partnership to form in the first place. You see the “ivory” walls that exist between students and staff that exist at many colleges just do not exist at HBCUs and nor should they. Many of our students have parents and family who work in these type of jobs so they have a respect for the work that is tirelessly being done. It allows a wholistic development and humility for our students to be taught by everyone on the campus because everyone has something to offer to our students.

What eventually would come of the Gaines & Johnson partnership? That one club turned into a major food & events management and development company eventually going public on the Ghana Stock Exchange. They would continue to open clubs and eventually find their way into opening casinos, hotels, and restaurants using Hillman architecture, business, engineering, and hospitality graduates. The food & events management division would have the culture of The Pit. Run on a tight ship and on time. Its reputation throughout the industry would be unheralded. They would eventually secure contracts with multiple professional sports organizations and would be lead company managing the Super Bowl. Their development company would ultimately land a development deal in Tokyo, Japan for a major hotel and restaurant with the assistance of fellow alum and Senior Vice President Dwayne Wayne at Kenishewa who uses his influence to secure them favor.

This is the beauty you see on HBCU campuses. That our students and staff most often come from communities and families that allow them to relate to each other and see in each other the reminder of today and promise of tomorrow. Dr. Carter G. Woodson said in Miseducation of the Negro, African Americans would come from a family whose mother had been a maid washing clothing, they would go off to colleges and instead of them coming back and starting a chain of cleaners would rather become highbrow and go off to work in some company as still nothing more than fancy labor with a nice title. Missing an opportunity to truly build on the knowledge of the generation before and create ownership for the family and community. Most often because we were taught that only the “educated” have value instead of understanding that value is in the knowledge whatever it maybe and whomever it maybe coming from.

It is the unique relationship that often times HBCU staff see in the students the optimism for their own families. Something tangible which is why more than any other college or university I have visited during graduation, it is at HBCUs I most often see staff there and afterwards in pictures with students or students going to say those last goodbyes to the cafeteria worker who made sure they ate during finals. Or in the case of Mr. Gaines and Ron building on the expertise and knowledge of both even if it came via different sources. You see in that way on HBCU campuses there are opportunities everywhere and with everyone. There are lessons to be gained and leadership to be viewed from everywhere and everyone. There is much to be gained from the Mr. Gaines’ of HBCU campuses and as such their knowledge, value, and leadership must be respected and valued as much as any on our campuses. Lou Meyers you will be missed but the immortality of Mr. Gaines and all that his character embodied will live on.