Burkina Faso is a poor, landlocked country that relies heavily on cotton and gold exports for revenue. The country has few natural resources and a weak industrial base. About 90% of the population is engaged in subsistence agriculture, which is vulnerable to periodic drought. Cotton is the main cash crop. Since 1998, Burkina Faso has embarked upon a gradual privatization of state-owned enterprises and in 2004 revised its investment code to attract foreign investment. As a result of this new code and other legislation favoring the mining sector, the country has seen an upswing in gold exploration and production. By 2010, gold had become the main source of export revenue. Gold mining production doubled between 2009 and 2010. Two new mining projects were launched in the third quarter of 2011. Local community conflict persists in the mining and cotton sectors, but the Prime Minister has made efforts to defuse some of the economic cause of public discontent, including announcing income tax reductions, reparations for looting victims, and subsidies for basic food items and fertilizer. An IMF mission to Burkina Faso in October 2011 expressed general satisfaction with the measures. The risk of a mass exodus of the 3 to 4 million Burinabe who live and work in Cote d’Ivoire has dissipated, and trade, power, and transport links are being restored. Burkina Faso experienced a severe drought in 2011, which decimated grazing land and decreased harvests, creating food insecurity and damaging the country’s agricultural base. 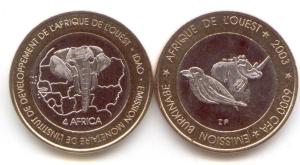 This entry was posted in Histronomics and tagged african currencies, burkina faso. Bookmark the permalink.