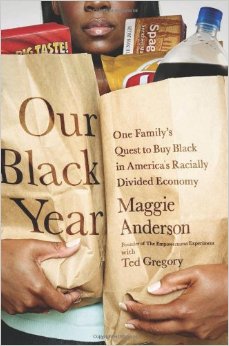 Maggie and John Anderson were successful African American professionals raising two daughters in a tony suburb of Chicago. But they felt uneasy over their good fortune. Most African Americans live in economically starved neighborhoods. Black wealth is about one tenth of white wealth, and black businesses lag behind businesses of all other racial groups in every measure of success. One problem is that black consumers–unlike consumers of other ethnicities– choose not to support black-owned businesses. At the same time, most of the businesses in their communities are owned by outsiders.

On January 1, 2009 the Andersons embarked on a year-long public pledge to “buy black.” They thought that by taking a stand, the black community would be mobilized to exert its economic might. They thought that by exposing the issues, Americans of all races would see that economically empowering black neighborhoods benefits society as a whole. Instead, blacks refused to support their own, and others condemned their experiment. Drawing on economic research and social history as well as her personal story, Maggie Anderson shows why the black economy continues to suffer and issues a call to action to all of us to do our part to reverse this trend.