“Help your pieces so they can help you.” – Paul Morphy 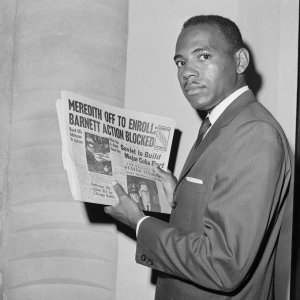 This past Monday was the 50th anniversary of James Meredith’s forced entry into Ole Miss. A university that in the past symbolically was the pride of the south’s European American institutional power and today still remains something of an enigma of that symbolism. The entry of James Meredith into Ole Miss would would be a complex matter that would have then Governor Ross Barnett giving fiery speeches in public and in private trying to work out a deal with President John F. Kennedy to save face.  Ultimately, the entrance of Mr. Meredith would end in bloody riots as mobs descended on the campus from all across the south and require 20,000 U.S. troops to restore order.

Many of the Civil Rights Movement generation look back at this as a shining moment of overcoming the “evils” of segregation. Unfortunately, it is one of many moments where the purpose of what should have been fought for was put at the back burner for facade changes not institutional ones. One could argue had we spent more time fighting for reallocation of resources so that schools like Alcorn State, Jackson State, and Mississippi Valley State actually had equal resources to their counterparts at Ole Miss the impact on today’s African America in Mississippi would have been profoundly greater. Instead, we used all of that energy to ensure the admittance of one man into a hostile environment for which we controlled none of the social, economic, or political capital of the institution and still do not to this day. If one could find one category where the African American community’s institutional power position has improved since James Meredith’s entrance I would wholeheartedly love to see it.

A look at the cold hard numbers show us not a story of progress but regression for African Americans in Mississippi. The median household income of African-Americans in the state in 2006 was $21,969 or just 51 percent that of European-American households ($43,139), this according to the Center for Policy Research and Planning in Mississippi. The median income for African Americans nationally is $34,218 and for European Americans nationally it is $55,530. This means that European-American Mississippians are making 77 percent  of their group’s national median while African-American Mississippians are making approximately 65 percent. The CPRP reports “And trends are not promising, based on the most recent data available: the gap between the earnings of whites and blacks in the state widened over the 1999-2006 period. Nationally, the gap remained the same.” Keep in mind the median income level for the poverty level is $23,050. Examining the combined endowments for Ole Miss, Mississippi State, and Southern Mississippi according to NACUBO equal approximately $876 million meanwhile the combined endowments from US News and NACUBO for Alcorn State, Jackson State, and Mississippi Valley State stand at approximately $23 million or 38 times less. This is just the economic numbers.

The state of Mississippi has one board that oversees all eight of its four year public universities of which there are three African American universities or HBCUs. The board has one HBCU graduate out of thirteen. In the state senate of fifty three members there are only seven HBCU graduates. On the surface that sounds like an amazing representation until you realize that almost 40 percent of Mississippi’s population is African American while the seven out of fifty three represents a 13 percent representation in the political sphere. I could touch on the social state of African Americans in Mississippi but this might turn into a book at that rate, but as we see with the economic and political power or lack thereof it is not hard to assume the social state.

There was a fight to be fought during the Civil Rights Movement absolutely. It is pretty clear however we failed at what the goal of that fight should have been. We went for the as Malcolm so eloquently put “sitting on the toilet next to white folks” goal instead of the institutional fight. To this day I am not sure why we thought the abandonment of our institutions was a sensible endgame. Mr. Meredith did not get to bring any professors that looked like him to Ole Miss and one would be foolish to assume the Ole Miss ruling party is any more inclined to share its spoils with the African American community today than it was when Mr. Meredith first showed up at their doors. One can analyze by the trend in the numbers that things are worse in Mississippi for African Americans than the overall state of African America. So it is not hard to presume that if the overall wealth of African America is $0.02 for every $1.00 European America has overall then that number is even lower in Mississippi. That in itself is a frightful prospect that might give me nightmares tonight.

I respect the elder Meredith as a fighter and all who partook in the Civil Rights Movement. Unfortunately, I find that most of what they fought for has made us more reliant on other communities and less independent than our forebears of Rosewood and Black Wall Street in Tulsa. While all other groups have embraced building higher education institutions that they socially, economically, and politically control for the benefit of their communities – Brandeis for the European Jews, Notre Dame for the European Catholics, BYU for the European Mormons, 36 Native American colleges, and the Hispanic Association of Colleges & Universities – we as African American continue an endless debate of are HBCUs even necessary and should we be making ourselves “less” HBCU. HBCUs only comprise 2.5 percent of all colleges and universities in this country. There has never been a study of just how many colleges of the over 4 000 that exist remain 95 percent and above European American. Yet, the very few we control we are willing to give up for the sake of some illusion of inclusion. You can not give up all your chess pieces to your opponent and expect to win the game. Assuming of course you know you are playing.