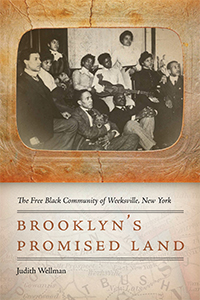 In 1966 a group of students, Boy Scouts, and local citizens rediscovered all that remained of a then virtually unknown community called Weeksville: four frame houses on Hunterfly Road. The infrastructure and vibrant history of Weeksville, an African American community that had become one of the largest free black communities in nineteenth century United States, were virtually wiped out by Brooklyn’s exploding population and expanding urban grid.

Weeksville was founded by African American entrepreneurs after slavery ended in New York State in 1827. Located in eastern Brooklyn, Weeksville provided a space of physical safety, economic prosperity, education, and even political power for its black population, who organized churches, a school, orphan asylum, home for the aged, newspapers, and the national African Civilization Society. Notable residents of Weeksville, such as journalist and educator Junius P. Morell, participated in every major national effort for African American rights, including the Civil War.

In Brooklyn’s Promised Land, Judith Wellman not only tells the important narrative of Weeksville’s growth, disappearance, and eventual rediscovery, but also highlights the stories of the people who created this community. Drawing on maps, newspapers, census records, photographs, and the material culture of buildings and artifacts, Wellman reconstructs the social history and national significance of this extraordinary place. Through the lens of this local community, Brooklyn’s Promised Land highlights themes still relevant to African Americans across the country.

This entry was posted in Books and tagged brooklyn, judith wellman, weeksville. Bookmark the permalink.