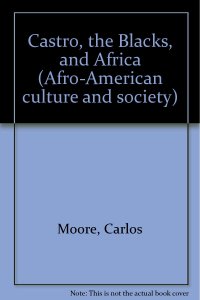 Professor Carlos Moore, an Afro-Cuban of Barbadian and Jamaican origin gives an informed view of race relations in post-revolutionary Cuba. Though not the usual made-in-Miami anti-Castro harangue, Professor Moore is harsh on Castro’s ruling class and attempts to shatter many of the romanticized myths of the colour blind Revolution. In fact, Moore argues that the Revolutionary leaders already imbued with their own prejudices and racialist values applied them in their dealings with Afro-Cubans. Professor Moore writes that the Revolution made no allowances for negritude and that it was policy to decry all attempts at African awareness and preservation of African culture and values.
Interestingly, Professor Moore argues that Castro’s internationalist forays into Africa were self-serving. The writer perceives these as as attempts to placate the increasingly disaffected, disenchanted Afro Cubans and build third world solidarity to counterbalance isolation from the developed world. Of interest also are the appendices to Castro, The Blacks and Africa. Scholars of race and the sociology of the Caribbean and Latin America discuss race issues and ethnology in Latin America. These appendices serve to underscore Professor Moore’s premise that the Revolution did not attempt to solve the racial issues in Cuba.
Professor Carlos Moore’s work is well written, with interesting photographs and makes for good reading. It also serves as a useful reference text not only on the Cuban Revolution, but also on race relations in the Caribbean and Latin America.