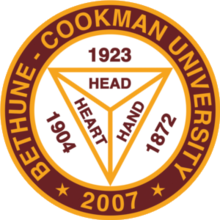 Analysis: Bethune-Cookman University needs approximately a $1.6 billion endowment for all of its undergraduates to attend debt free annually. The flagship private HBCU in Florida and the 7th ranked HBCU endowment in 2011 and 2012. An HBCU with one of the most storied histories via its founder Mary McLeod Bethune. Its current endowment is 2.6 percent of the needed endowment. Bethune-Cookman even with its prestige is sometimes forgotten in the whole of HBCU conversations and at times Mary McLeod Bethune’s ghost seems to lord a heavier presence than the institution she founded. Despite this, the school continues to produce quality graduates and has the 3rd lowest reported student loan debt per graduate in the MEAC. A vitally important factor in graduates being able to achieve wealth more quickly upon graduation and thereby being able to become qualified donors sooner. Unfortunately, Bethune-Cookman has a limited graduate school which is highly problematic for a flagship private school and should be an area the school looks to for an expansion. This is a primary limitation of the school producing more high quality donors long-term and could become problematic. However, if Bethune-Cookman has proven anything over the course of its history, it has proven to be a stable ship amongst HBCUs never wavering too far off course of its intended mission. It also must look to triple its undergraduate population over the next decade in order to increase the size of its alumni population. An issue facing almost every HBCU with Bethune-Cookman University not being exempt. A marketing campaign centered around its geography would not hurt the school’s ability to increase enrollment. Being located in Daytona Beach is an ideal setting to sell to high school graduates, transfer students, and graduate students. The school is on the cusp of becoming a $50 million endowment but would need to come up with an outside of the box capital campaign over the next decade to encroach on the $100 million endowment club. There certainly is not a steadier HBCU in Florida than Bethune-Cookman University at the moment and if it can continue to promote that stability it will undoubtedly payoff in the long run allowing it to maintain its place in the HBCU echelon.

This entry was posted in Philanthropy and tagged bethune-cookman university, endowment, HBCUs. Bookmark the permalink.