A financial derivative that represents a contract sold by one party (option writer) to another party (option holder). The contract offers the buyer the right, but not the obligation, to buy (call) or sell (put) a security or other financial asset at an agreed-upon price (the strike price) during a certain period of time or on a specific date (exercise date).

Call options give the option to buy at certain price, so the buyer would want the stock to go up.

Put options give the option to sell at a certain price, so the buyer would want the stock to go down.

Options are extremely versatile securities that can be used in many different ways. Traders use options to speculate, which is a relatively risky practice, while hedgers use options to reduce the risk of holding an asset.

In terms of speculation, option buyers and writers have conflicting views regarding the outlook on the performance of an underlying security.

This is exactly the opposite outlook of the option buyer. The buyer believes that the underlying stock will rise, because if this happens, the buyer will be able to acquire the stock for a lower price and then sell it for a profit. 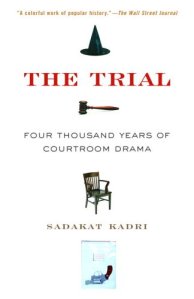 For as long as accuser and accused have faced each other in public, criminal trials have been establishing far more than who did what to whom–and in this fascinating book, Sadakat Kadri surveys four thousand years of courtroom drama.

A brilliantly engaging writer, Kadri journeys from the silence of ancient Egypt’s Hall of the Dead to the clamor of twenty-first-century Hollywood to show how emotion and fear have inspired Western notions of justice–and the extent to which they still riddle its trials today. He explains, for example, how the jury emerged in medieval England from trials by fire and water, in which validations of vengeance were presumed to be divinely supervised, and how delusions identical to those that once sent witches to the stake were revived as accusations of Satanic child abuse during the 1980s.

Lifting the lid on a particularly bizarre niche of legal history, Kadri tells how European lawyers once prosecuted animals, objects, and corpses–and argues that the same instinctive urge to punish is still apparent when a child or mentally ill defendant is accused of sufficiently heinous crimes.

But Kadri’s history is about aspiration as well as ignorance. He shows how principles such as the right to silence and the right to confront witnesses, hallmarks of due process guaranteed by the U.S. Constitution, were derived from the Bible by twelfth-century monks. He tells of show trials from Tudor England to Stalin’s Soviet Union, but contends that “no-trials,” in Guantánamo Bay and elsewhere, are just as repugnant to Western traditions of justice and fairness. With governments everywhere eroding legal protections in the name of an indefinite war on terror, Kadri’s analysis could hardly be timelier.

At once encyclopedic and entertaining, comprehensive and colorful, The Trial rewards curiosity and an appreciation of the absurd but tackles as well questions that are profound. Who has the right to judge, and why? What did past civilizations hope to achieve through scapegoats and sacrifices–and to what extent are defendants still made to bear the sins of society at large? Kadri addresses such themes through scores of meticulously researched stories, all told with the verve and wit that won him one of Britain’s most prestigious travel-writing awards–and in doing so, he has created a masterpiece of popular history.

*All quotes reported as of 2:00 PM Eastern Time Zone

An interest rate at which banks can borrow funds, in marketable size, from other banks in the London interbank market. The LIBOR is fixed on a daily basis by the British Bankers’ Association. The LIBOR is derived from a filtered average of the world’s most creditworthy banks’ interbank deposit rates for larger loans with maturities between overnight and one full year.

The LIBOR is the world’s most widely used benchmark for short-term interest rates. It’s important because it is the rate at which the world’s most preferred borrowers are able to borrow money. It is also the rate upon which rates for less preferred borrowers are based. For example, a multinational corporation with a very good credit rating may be able to borrow money for one year at LIBOR plus four or five points.

Countries that rely on the LIBOR for a reference rate include the United States, Canada, Switzerland and the U.K.

In 1971, President Nixon imposed national price controls and took the United States off the gold standard, an extreme measure intended to end an ongoing currency war that had destroyed faith in the U.S. dollar. Today we are engaged in a new currency war, and this time the consequences will be far worse than those that confronted Nixon.

Currency wars are one of the most destructive and feared outcomes in international economics. At best, they offer the sorry spectacle of countries’ stealing growth from their trading partners. At worst, they degenerate into sequential bouts of inflation, recession, retaliation, and sometimes actual violence. Left unchecked, the next currency war could lead to a crisis worse than the panic of 2008.

Currency wars have happened before-twice in the last century alone-and they always end badly. Time and again, paper currencies have collapsed, assets have been frozen, gold has been confiscated, and capital controls have been imposed. And the next crash is overdue. Recent headlines about the debasement of the dollar, bailouts in Greece and Ireland, and Chinese currency manipulation are all indicators of the growing conflict.

As James Rickards argues in Currency Wars, this is more than just a concern for economists and investors. The United States is facing serious threats to its national security, from clandestine gold purchases by China to the hidden agendas of sovereign wealth funds. Greater than any single threat is the very real danger of the collapse of the dollar itself.

Baffling to many observers is the rank failure of economists to foresee or prevent the economic catastrophes of recent years. Not only have their theories failed to prevent calamity, they are making the currency wars worse. The U. S. Federal Reserve has engaged in the greatest gamble in the history of finance, a sustained effort to stimulate the economy by printing money on a trillion-dollar scale. Its solutions present hidden new dangers while resolving none of the current dilemmas.

While the outcome of the new currency war is not yet certain, some version of the worst-case scenario is almost inevitable if U.S. and world economic leaders fail to learn from the mistakes of their predecessors. Rickards untangles the web of failed paradigms, wishful thinking, and arrogance driving current public policy and points the way toward a more informed and effective course of action.