CONCLUSION: The overall economy added 138 000 jobs in May. This is versus an expected 185 000 by surveyed economists. African America saw an increase of 46 000 jobs, but quite a pullback after over 100 000 jobs in April. Despite strong numbers, many can not help but feel apprehensive about the economy’s sluggishness. An expected rate hike in June is still on the table, but it is less certain after two months straight of missed expectations. African America continues to push forward under the Trump administration with its highest employed numbers seeing an increase every month thus far. We know the economy is overdue for a recession, but it is by no means overheated leaving most economist in unfamiliar territory of just what happens going forward. 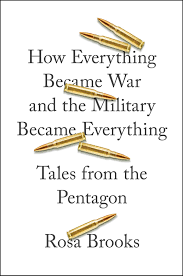 The first serious book to examine what happens when the ancient boundary between war and peace is erased.

Once, war was a temporary state of affairs—a violent but brief interlude between times of peace. Today, America’s wars are everywhere and forever: our enemies change constantly and rarely wear uniforms, and virtually anything can become a weapon. As war expands, so does the role of the US military. Today, military personnel don’t just “kill people and break stuff.” Instead, they analyze computer code, train Afghan judges, build Ebola isolation wards, eavesdrop on electronic communications, develop soap operas, and patrol for pirates. You name it, the military does it.

Rosa Brooks traces this seismic shift in how America wages war from an unconventional perspective—that of a former top Pentagon official who is the daughter of two anti-war protesters and a human rights activist married to an Army Green Beret. Her experiences lead her to an urgent warning: When the boundaries around war disappear, we risk destroying America’s founding values and the laws and institutions we’ve built—and undermining the international rules and organizations that keep our world from sliding towards chaos. If Russia and China have recently grown bolder in their foreign adventures, it’s no accident; US precedents have paved the way for the increasingly unconstrained use of military power by states around the globe. Meanwhile, we continue to pile new tasks onto the military, making it increasingly ill-prepared for the threats America will face in the years to come.

By turns a memoir, a work of journalism, a scholarly exploration into history, anthropology and law, and a rallying cry, How Everything Became War and the Military Became Everything transforms the familiar into the alien, showing us that the culture we inhabit is reshaping us in ways we may suspect, but don’t really understand. It’s the kind of book that will leave you moved, astonished, and profoundly disturbed, for the world around us is quietly changing beyond recognition—and time is running out to make things right.

Every Saturday the HBCU Money staff picks ten articles they were intrigued by and think you will enjoy for some weekend reading impacting finance and tech.

Early humans were long assumed to have traveled south from Alaska. But in Peru, many stayed put. / Science News http://ow.ly/nfoF30ciktY

As NASA puts together a mission to Europa, discover another possible home to alien life – just four light years away / New Scientist http://newscienti.st/2sigc2O

Scientists are maintaining their round-the-clock observations of this mysterious star. / Nova PBS http://to.pbs.org/2sBwjIl

America has a problem with opioids. Virtual reality might be the answer / WEF http://wef.ch/2qJwJQz

Swearing on social media really could cost you your job / WEF http://wef.ch/2rcTBrc