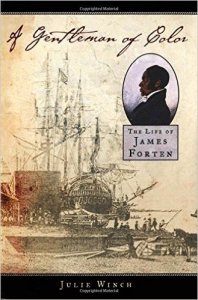 Winch has written the first full-length biography of James Forten, a hero of African American history and one of the most remarkable men in 19th-century America.

Born into a free black family in 1766, Forten served in the Revolutionary War as a teenager. By 1810 he had earned the distinction of being the leading sailmaker in Philadelphia. Soon after Forten emerged as a leader in Philadelphia’s black community and was active in a wide range of reform activities. Especially prominent in national and international antislavery movements, he served as vice-president of the American Anti-Slavery Society and became close friends with William Lloyd Garrison to whom he lent money to start up the Liberator. His family were all active abolitionists and a granddaughter, Charlotte Forten, published a famous diary of her experiences teaching ex-slaves in South Carolina’s Sea Islands during the Civil War.

This is the first serious biography of Forten, who stands beside Harriet Tubman, Frederick Douglass, Booker T. Washington, and Martin Luther King, Jr., in the pantheon of African Americans who fundamentally shaped American history.

This entry was posted in Books and tagged gentleman of color, james forten, julie winch. Bookmark the permalink.