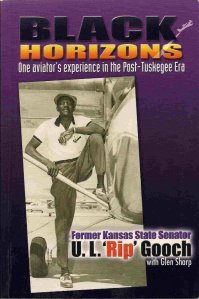 Black Horizons is the memoir of an orphan who went from the bottom to become a pioneering aviator, businessman and politician in the post-Tuskegee Airmen era.

As a poor African-American youngster picking cotton in a 1930s Tennessee field, U.L. Rip Gooch would look to the sky as airplanes flew overhead and think about escaping to a better life. Soon after World War II, he earned his pilot’s license with “Chief” C. Alfred Anderson, but found that racist hiring practices among airlines and other companies did not allow employment of black aviators, even those who gained fame as Tuskegee Airmen.
Rip fought back using business principles instead of violence. In time he built a million-dollar aviation business selling Mooney Aircraft in the Air Capital of the World (Wichita, Kansas), accrued 20,000 flight hours, and became one of the few black politicians in one of the most conservative states in the nation.

This entry was posted in Books and tagged black horizons, tuskegee airmen. Bookmark the permalink.