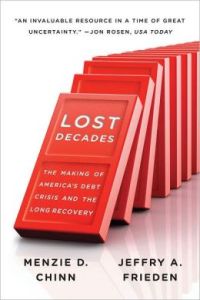 A clear, authoritative guide to the crisis of 2008, its continuing repercussions, and the needed reforms ahead.

The U.S. economy lost the first decade of the twenty-first century to an ill-conceived boom and subsequent bust. It is in danger of losing another decade to the stagnation of an incomplete recovery. How did this happen? Read this lucid explanation of the origins and long-term effects of the recent financial crisis, drawn in historical and comparative perspective by two leading political economists.

By 2008 the United States had become the biggest international borrower in world history, with more than two-thirds of its $6 trillion federal debt in foreign hands. The proportion of foreign loans to the size of the economy put the United States in league with Mexico, Indonesia, and other third-world debtor nations. The massive inflow of foreign funds financed the booms in housing prices and consumer spending that fueled the economy until the collapse of late 2008. This was the most serious international economic crisis since the Great Depression of the 1930s.

Menzie Chinn and Jeffry Frieden explain the political and economic roots of this crisis as well as its long-term effects. They explore the political strategies behind the Bush administration’s policy of funding massive deficits with foreign borrowing. They show that the crisis was foreseen by many and was avoidable through appropriate policy measures. They examine the continuing impact of our huge debt on the continuing slow recovery from the recession. Lost Decades will long be regarded as the standard account of the crisis and its aftermath.

This entry was posted in Books and tagged debt crisis, great recession. Bookmark the permalink.